Derbyshire County Council's (DCC) Highways Department is responsible for all the roads in Quarndon, so our primary contact for issues relating to roads is our county councillor, Gez Kinsella. DCC's budget is limited, which means road safety improvements are prioritised at locations with a history of multiple accidents with fatalities and/or serious injuries. As a result, it is a slow and frustrating process trying to get DCC to take action to improve safety where there is a clear risk, but no regular history of accidents. 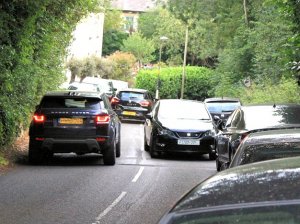 Cars parked on the pavement by the Joiners Arms, Church Road

Quarndon Traffic Group continue to lobby Derbyshire County Council in order to highlight and mitigate traffic issues in the village. Areas of concern and action continue to involve:

Responses to the Neighbourhood Plan questionnaire revealed concern amongst residents about traffic in the village – especially speeding and parking.

With traffic there are not always quick fixes, and Quarndon isn't the only village with these challenges. However the group actively liaises with bodies responsible for roads, highways and enforcement with the aim of making movement around the village safe for pedestrians and road traffic alike.

So what can you do?

If you take a break from mowing over the summer and let your grass grow longer, you may be surprised at the number of wildflowers that appear.
There were more than 10 different flowers on the verge where this photo was taken this July on Burley Lane in the centre of Quarndon village. Shown here are yarrow (white), bird's foot trefoil (yellow), and harebell (blue).
Once part of the Common , and later a meadow, the dry sandy soil of this sunny spot supports a great diversity of plant and invertebrate life.

(Photo and text from Ros Grum)