The Localism Act, introduced by the Government in November 2011, aims to devolve more decision-making powers from Central Government into the hands of individuals, communities, and councils. One of the key aspects to this is the ability of communities to produce a Neighbourhood Development Plan (or "Neighbourhood Plan") to define specific policies that shall be used, in conjunction with the applicable local plan, to decide planning applications in the Neighbourhood Plan Area.

A Neighbourhood Plan, whilst defining specific local policy, shall align with national planning policy defined by the National Planning Policy Framework (NPPF) and also the applicable local planning policies, which in the case of Quarndon are currently contained in the Amber Valley Borough Council (saved) Local Plan 2006.

The diagram below shows the relationship between the NPPF, Local Plan, and Neighbourhood Plans within Amber Valley. 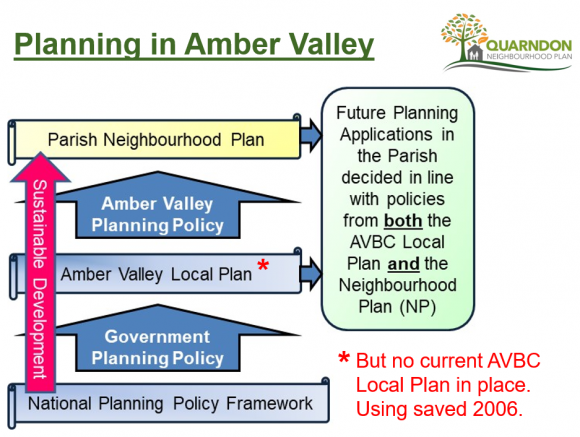 The Quarndon Neighbourhood Plan (QNP) was produced by a volunteer steering group of 10 residents, working under the authority of the Quarndon Parish Council. The QNP and its policies were derived from extensive consultation with residents and stakeholders in the parish. Following independent examination, the QNP was accepted by a 95% majority of voters in a Parish referendum on 27 June 2019, and the Plan was formally "made" by AVBC on 20 August 2019. It will remain in force to year 2033.

If you take a break from mowing over the summer and let your grass grow longer, you may be surprised at the number of wildflowers that appear.
There were more than 10 different flowers on the verge where this photo was taken this July on Burley Lane in the centre of Quarndon village. Shown here are yarrow (white), bird's foot trefoil (yellow), and harebell (blue).
Once part of the Common , and later a meadow, the dry sandy soil of this sunny spot supports a great diversity of plant and invertebrate life.

(Photo and text from Ros Grum)